The Story of Becoming a Japan Heritage

Mysterious Lands and Mesmerizing Sceneries Created by the Wind Rising Over the Sea of Japan
Inaba and Tajima:
The Lands Where the Sacred Beast Dances - The Kirin

The San'in region is located in the north of the Chugoku region. In its eastern part, you will find the Inaba and Tajima areas, which are close to the Sea of Japan, as well as the Chugoku Mountains.

The strong northeast seasonal winds, originating from the Sea of Japan, blow across these areas. They lash against the Chugoku Mountains, and as they bring about heavy snowfalls, awaken raging waves in the sea, which artfully shape the coast. In the mountain region, the river grints rocks into powder and carries them down to the sea, where they are surged up again by the waves and create Japans biggest Dunes, the "Tottori Sand Dunes". 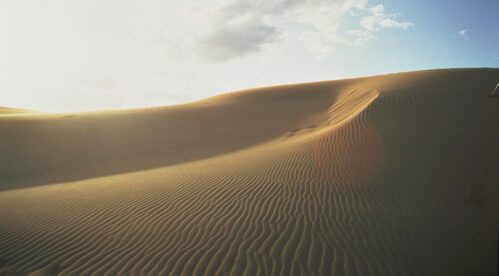 Everything is covered in sand as far as the eye can see. Sometimes its surface is dynamic, sometimes calm.

The Tottori Sand Dunes have a very dynamic surface, with a elevation difference of 90m. The dunes are also covered by the many artistic shapes created by the wind, such as wavy patterns called "wind ripples", "sand curtains", where sand slips off a slope like a closing curtain, and "sand poles", where sand is growing upwards into the air.

Leaving footprints on this vast sandy surface of the dunes and climbing up the enormous wall of sand called the "Horse Back", you will be able to feel the wind that has traveled a long way over the Sea of Japan rustling through your hair.

The rocks of the Chugoku Mountains, that have been grinted to powder by the course of the river and turned into sand, are carried down to the ocean. For many months and years the wind blows up this sand, which then has grown into the vast Tottori Sand Dunes.

At the western edge of the Sand Dunes lies the "Fuzofuken Pond", which regardless of the season keeps the same water level. According to Japan's oldest historical records, the White Rabbit of Inaba, a mystical creature appearing in one of the stories in these records, washed itself in this pond.

The sand carried away by the raging waves does not only create the Tottori Sand Dunes. It also formed the belt shaped sandbanks, which bless the people with many peaceful lagoons.

Proof that about 2000 years ago people had been using the langoons as ports was found in the region of the Aoya-Kamijichi Site. They also discovered several objects that confirm that Mainland China and various places of the Japanese Islands had already been trading goods in those days. These pieces let us appreciate the high level of crafts and arts of those former days.

The land activity of this area is treasured as an important heritage. On top of that, people have invented new ways of shaping this heritage into a new form of art. By carving sand into "Sand Sculptures", they evolve the appeal of sand with their own hands. 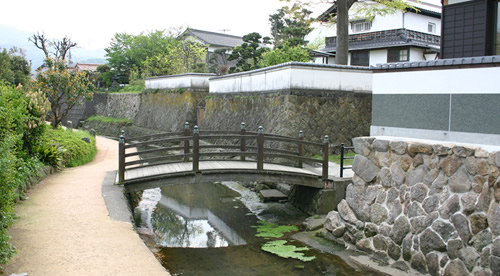 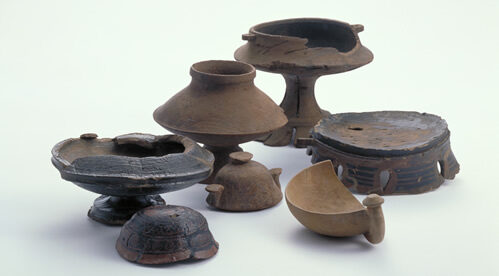 Walking from the Tottori Sand Dunes along the shore of the Sea of Japan, you will believe to see the silhouettes of dragons and kirin, carved into uniquely shaped rocks and caves by raging waves. You can enjoy about 50km of diverse coastal landforms, such as bays with beautifully white colored beaches.

Here you will find the most exiting spots illustrating the coexistence of the complex rugged coast and the people living in this area: Scattered communities and fishing villages located at cliff tops and deeply cut in bays, avoiding the raging waves. You will come across the "Amarube Iron Bridge", which was constructed as a railroad to traverse the cliffs and travel from the ocean to the mountains. The so called "Station in the Sky", located on this bridge, enthralls visitors with a beautiful panoramic view.

From the "Misaki Community", located on the top of a cliff, you can look down at the Sea of Japan. Isolated from other communities, the legend of the Fleeing Heike Warriors is being passed along here.

The "Momote Ritual" is an old tradition continued upon this day. There, the eye of the warrior's enemy is drawn on a target, which is then shot with a total of 101 arrows.

These fishing villages are bustling hub ports for Matsuba Crab and White Squid fishing, and houses with board fences to withstand the wind are lined up here.

The atmosphere of this region has not changed since the 17th century. The people keep synchronizing their daily lives with the beautiful coastline and the raging waves induced by the wind, thus keeping alive the traditions of the fishing industry. 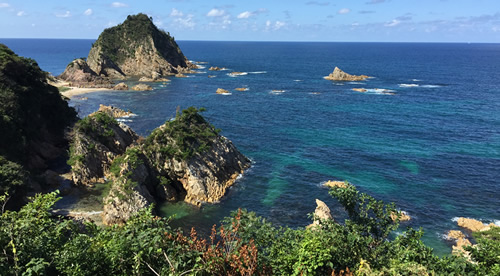 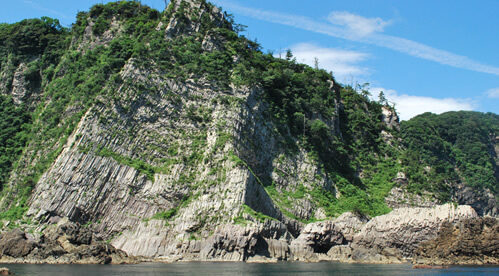 Following the swift currents of the river upstream to the Chugoku Mountains, you will reach the Yamasato district, covered by heavy snow blankets.

Heading from there to the back of one of the countless deep valleys, a small mountain village with thatched roofs is secretly hidden together with a mansion enframed by dense cedar forests.

This is the "Residence of the Ishitani Family", a symbol of the prosperity of this mountainous region, which once flourished into a post-station town with a beautiful townscape. The mansion was built at the beginning of the 20th century, and in its vast grounds you will find 7 warehouses and more than 40 rooms.

When you set foot on the earthen floor or the main house, you will see impressing ceiling beams made out of huge trees with a lenght of 14m.

This mansion was built with the help of forestry knowledge, which has been flourishing in this area since the 19th century. You can enjoy the sunlight shining through the high windows, as well as the thick pillars and beams that guard the building against heavy snowfalls.

The winter snow and cold have created wild cedar trees with branches growing downward because of the weight of the snow. The people raised more of these wild cedars by replanting cuttings, and created a cedar forest with large-diameter trees.

This is Japan's oldest planted forest, made of around 350 years old "Keicho cedar". Together with the long history of working in the mountain area, the feelings of gratitude towards the cedar which brought prosperity is expressed in the "Sugi Shrine"*. Here, the spirit of the cedar is enshrined within a white triangle tower.
*"Sugi" means "cedar" in Japanese

The planted cedar forest and natural forest of Satoyama interweaved create a beautiful scenery. Sake brewerys as well as many other houses in this area invite visitors with the scent of cedars, by hanging cedar balls and snow lanterns out in their front yards.

As a means of transportation for forest resources, such as cedar wood and charcoal, the Wakasa Railway Wakasa Line was established in the early 20th century. The wooden station building remains the same since the line was opened for business. Since this is the terminal station of this line, you can find a manually operated railway turntable here, where the steam locomotive is rotated with.

In front of the station, you will find storehouses with white walls and red roof tiles that withstand the snowfalls. The eaves of the houses are extended over the road, creating an arcade called "Kariya". This and the mountain stream waterway along the street are countermeasures to heavy snowfalls.

After a large fire in 1885, these "Kariya" were installed by the citizens themselves. After that, even on days with heavy snowfalls, the murmuring of the waterway could be heard together with the voices of the people taking shelter under the "Kariya".

Turning our back to this village covered in snow, and heading upstream even further, you will be gazing up to a temple built into a natural cave, called the "Fudoin Iwayado Temple". The temple is set upon a stage-like platform and fits perfectly into the shape of the cave. The cave embraces Shinto and Buddhism alike, and the villagers have performed the "Homa Ritual"* here for more than 1000 years.
*Homa ritual: burning wooden sticks for blessings 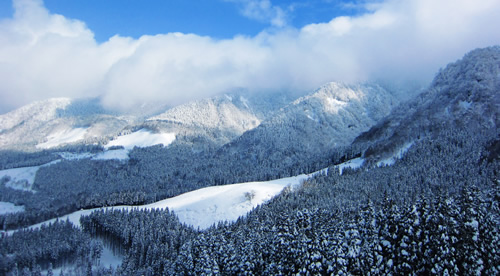 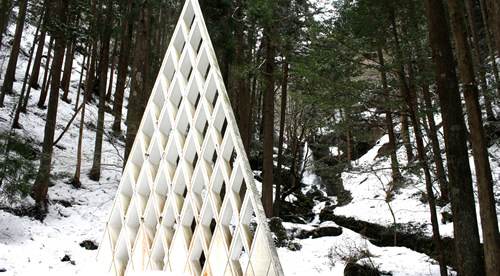 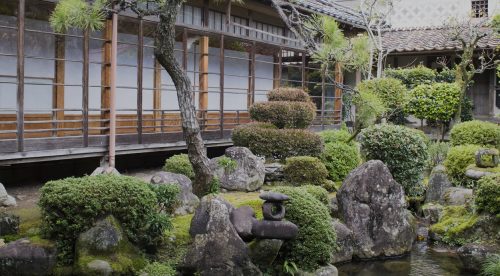 The Kirin Dance - Holding in Your Heart a Prayer for Peace

Clothed in scarlet, with one golden horn upon its head, the "Kirin Dance" has been passed down from generation to generation in around 180 villages of this area.

The Kirin is described in Chinese folklore as a creature that does not harm others, and is a symbol for a long period of peace. About 370 years ago, the first feudal lord of Tottori, Ikeda Mitsunaka, built a shrine to enshrine his distinguished great-grandfather, Tokugawa Ieyasu. A festival was held there, where a Lion dance was performed with the face mask of a Kirin. This was the first time that the Kirin was depicted in a dance.

The people who saw this dazzling figure wished for this tradition to be displayed at their own village festivals as well.

Thus, the villages created differing individual characteristics and shapes to the Kirins face and its manners of dancing. This was then passed down for generations.

On the one hand, the people of this area experience the many blessings of sand, waves and snow, granted to them by the wind. On the other hand, they have to withstand harsh natural conditions, such as sand drifts, raging waves and heavy snowfalls.

The people living in these harsh windy seasons hold in their hearts their prayer for safety, as well as their gratefulness for overcoming these hard times, and continue passing down the ancient Kirin Dance, which brings happiness not only to the locals, but also to the travellers encountering the Kirin.

The people of the Inaba and Tajima areas share their lives with the wind of the Sea of Japan, and accept the harshness of nature. Carrying the Kirin in their hearts, they pursue a long history of bravely pulling through their hardships. 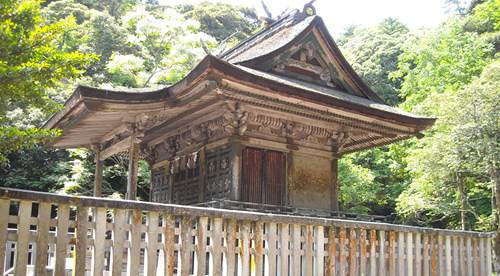 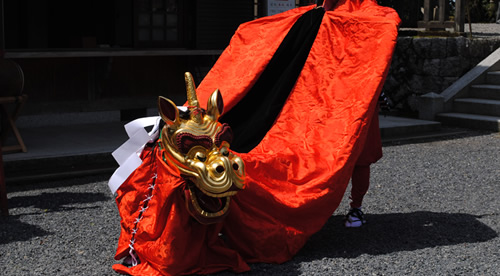